The Grammy Award winning R&B performer, The Weeknd is hitting the road and joining him on the run is none other than the diva, Doja Cat. The “After Hours til Dawn Stadium Tour” is in support of his two albums – “After Hours” that came out in 2020 and “Dawn FM” that hit the shelves in January 2022. The Weeknd & Doja Cat collaboration has taken the fans by storm and packed stadiums are being anticipated. Don’t miss out on The Weeknd & Doja Cat tickets as they are selling out fast. The North American leg starts on July 8, 2022 from Toronto and so far, 19 shows have been announced. According to the latest news, The Weeknd will also be touring Australia in 2023.

A Canadian record producer and R&B singer, Abel Tesfaye known as The Weeknd, is on tour and will soon be hitting the arenas in your town. The Weeknd tickets are your way to get in the venue and experience this great singer performing live on stage. Abel didn’t come to recognition until he started recording songs and uploading them on YouTube in 2010. He uploaded three tracks, "Loft Music”, “The Morning”, and “What You Need”. In these numbers, he covers the chorus and his eclectic music merges other samples such as from Beach House to Rock The Boat. The Weeknd was supported by his Toronto based fellow singer Drake and he introduced the artist to influential people. 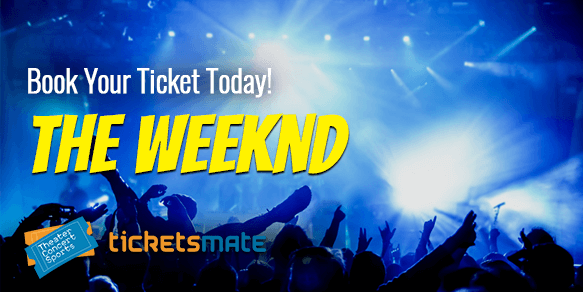 After Hours – The Album

“After Hours” is the title of the Weeknd’s chartbusting album that featured two hit singles, Blinding Lights and Heartless. He unveiled the album with the title track that received amazing reviews and reached top 20 at the Billboard Hot 100.

“After Hours” is the Canadian musician’s first studio record since “Starboy” came out in the year 2016. However, he did drop an EP in 2018 by the name of “My Dear Melancholy.” The aesthetic and artwork for “After Hours” promotional material is said to be inspired by various movies including Joker, Uncut Gems, Casino and Fear and Loathing in Las Vegas.

The record’s overall art direction is handled by the Tammi brothers; its design is looked after by Aleksi Tammi, while the photography and direction are managed by Anton Tammi. He has directed the music videos for both the songs Heartless and Blinding Lights.

The song Heartless was shared in November 2019 as the record’s lead single. It is co-written by The Weeknd in collaboration with producers Metro Boomin, Dre Moon and Illangelo. The track hit the number one spot on the US Billboard Hot 100 in its second week, becoming the singer’s fourth top song in the US.

The lyrics of Heartless make references to The Weeknd’s ex-girlfriends (Selena Gomez and Bella Hadid). In the first part of the song, he sings about returning to his playboy lifestyle after his break-up with his two girlfriends while in the second half, The Weeknd sings about his on-and-off relationship with Bella Hadid.

Heartless made its entry on the Billboard Hot 100 at number 32 while in the singer’s native Canada it reached the third position on the Canadian Hot 100. In the UK, the single hit the tenth spot, becoming The Weeknd’s seventh Top 10 hit in the country.

“After Hours” second single, Blinding Lights came out just two days after the release of Heartless. It was a massive commercial hit, reaching the second spot on the music charts in over a dozen countries including the UK where it was a number one hit. In the US, Blinding Lights hit the tenth position on the Billboard Hot 100.

The Weeknd announced dates for his headlining “After Hours Tour” in 2020 but due to COVID 19 it got cancelled. He used the time to compose his fifth album “Dawn FM” that featured collaboration with Tyler, the Creator and Lil Wayne. The 16-track album came out in January 2022 and featured popular bangers like Gasoline, Here We Go, Take My Breath, and I Heard You’re Married.

The Weeknd aesthetically showcased his musical prowess and packed a melodic pop punch with his compositions. His fourth album “After Hours” didn’t get a tour, so he has now combined both his albums and is hitting the road with “After Hours til Dawn Stadium Tour.” Joining him on the 19-date run will be Doja Cat, who has established herself as a dynamic and versatile performer. She will be promoting her 2021 album “Planter Her” that topped Billboard R&B charts. Don’t miss out on the Weeknd & Doja Cat tickets and have the time of your life.

The Weeknd released an album House Of Balloons consisting of nine songs in 2011. This record with the title track Happy House was acclaimed critically. The album was one of the ten shortlisted ones to be nominated for 2011 Polaris Music Prize. Unfortunately, the record couldn’t make it through. However, the album was titled number one 2011’s album by Complex Magazine.  A mixtape called Thursday that he came up with after his first release, was made available on the official website of Abel. Positive feedback was received by it. In 2012, he came up with the mixtape Echoes Of Silence, which was also nominated for the 2012 Polaris Music Prize. This tape is considered to be the most emotional one with strong lyrics that The Weeknd had ever released.

The Weeknd kicked off a tour to Toronto and gave his first performance at the Mod Club. This performance was liked by the spectators and created a huge fan following for him as the young R&B singer stole millions of hearts. He gave his second performance at Molson Canadian Amphitheatre with Drake who accompanied him and made a special guest appearance . By the April of 2012, The Weeknd started touring U.S.A. and performed at Coachella Festival. He is also planning to perform in some major festivals in Europe such as Primavera Sound Festival of Portugal and Spain, London’s wireless festival and also performing in concerts in Brussels and Paris. It is also confirmed that The Weeknd will be performing in the Third Annual OVO Fest.

The Weeknd has been praised by many music publications, which include MTV, Rolling Stone, The Source, XXL, BET and Pitchfork, who declared him as the "best musical talent since Michael Jackson and Songbird of his Generation. The fresh-faced approach of The Weeknd along with the infectious singing harmonies, crunchy guitar and heart touching lyrics has turned out to be an inspiration of rock hope in the time of ordinary music saturation. The eclectic music of his has made him one of the most famous independent musicians nationwide. Despite being such a talented and skilled performer, The Weeknd refuses to talk to press and take interviews but prefers to communicate only through Twitter. If you want to watch this new and emerging star with skills to boast about, buy some The Weeknd tickets and get ready to jam on the hit singles he will sing live on stage. You can also check the new footage by him on YouTube which is scheduled to be released in November.

The Weeknd has embarked on several tours, nationally as well as internationally and is now coming to your town for a performance that’s likely to take you by storm. The Weeknd tickets are selling rapidly as his fans don’t want to miss out on the concert. So hurry and book your tickets in advance as the night is going to be a blast. Songs that take your excitement to the next level, when performed live, will treat you to an event that you’ll remember for a long time.

The Weeknd is a Grammy winning R&B singer who recently produced a number one album on the Billboard 200 titled, ‘Starboy.’ He is now taking the show on the road to support his third studio record. Called, ‘Starboy: Legend of the Fall Tour,’ The Weeknd will be playing a total of forty six shows throughout Europe, South & North America. He will kick off his trek in February by taking the stage at the Ericsson Globe in Sweden on February 17, 2017 and will conclude it in June by performing his last show at the U.S. Bank Arena.

The Weeknd is all set to perform his hit single “Reminder” on the MTV Video Music Awards (VMAs) 2017. He is part of an all-star line-up that features Ed Sheeran, Kendrick Lamar and many others. The event will be hosted by his friend and co-worker, Katy Perry.

THE WEEKEND NEWS AND UPDATES

The Weeknd Reveals Dates for Massive 'After Hours' Tour

Canadian music artist The Weeknd recently announced a new album and has now unveiled the dates of a tour in its support. The outing kick starts with a show on June 11 in Vancouver and will include several dates across the US and Canada. Among the notable cities on the itinerary are Chicago, Los Angeles, Nashville and Toronto.

The average ticket price for The Weeknd tickets is $1099.64.

Available The Weeknd Tickets till today are 19 with 196350 seats available.

How much are The Weeknd Tickets?

The Weeknd tickets are typically available for as little as $65, with an average price of $1099.64

When do The Weeknd go on sale?

How to buy cheap The Weeknd tickets?

Do you offer premium tickets for The Weeknd ?

Some of the premium tickets for The Weeknd are in Toronto, ON on Fri, 8 Jul 2022. Often these are front row or floor seat tickets, best available (VIP) seats. These seats are in section A10 with 2 seats available at $7968.

How to get discount on The Weeknd tickets?

You can use the promo code "PROMOEVDT3" to get 3% discount on your purchase of The Weeknd tickets.

Are The Weeknd tickets refundable?

Yes, The Weeknd tickets are refundable.

How long before the event can I buy The Weeknd tickets?

You can buy The Weeknd tickets even on the day of the event, subject to availability. However, it is usually better to book tickets early since seats are limited and prices sometimes rise just before the event. We have 196350 available tickets for The Weeknd till the date Sat, 3 Sep 2022. Some of the cities where The Weeknd is performing are: East Rutherford 8730 tickets, Tampa 16458 tickets, Las Vegas 4723 tickets, Inglewood 22082 tickets, Toronto 3883 tickets.

How to Buy Verified The Weeknd tickets?

Buying verified tickets is extremely important. If you are looking for The Weeknd tickets, make sure you buy them from trusted sources. Book tickets from sellers who offer 100% money back guarantee and are popular vendors.

Nothing beats the joy of watching your favorite music artist perform live! The Weeknd's concert dates are out and fans are looking forward to the upcoming shows. The next concert will be held in Toronto at the Rogers Centre on 8-Jul-22, while the last available date is for the event scheduled for Inglewood at the SoFi Stadium on 3-Sep-22. For complete information regarding dates and venues, please visit our website.

The Weeknd Other Events