Foo Fighters tickets are selling off like hot cakes, so get hold of them as soon as you can. The band is one of the most influential rock bands of its era. Foo Fighters was incepted as a one-man project by Nirvana drummer, Dave Grohl. Over the course of its career, the group has released a number of hit anthems such as Learn to Fly, All My Life, and The Pretenders. Their music has been influenced by the like of The Beatles, Led Zeppelin, and Pink Floyd. If rock music is your thing, then check the Foo Fighters 2021 tour dates and watch the legends live in concert. 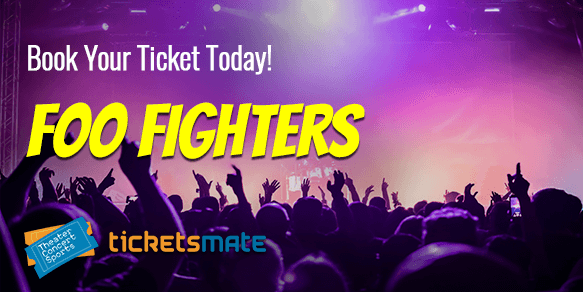 In 2021, rock fans will get to watch the iconic Foo Fighters live in concert. The band has announced to hit the road for what will be among the most highly-anticipated tours of the year. Grab your Foo Fighters tickets and catch them performing live.

When the legendary grunge band, Nirvana disbanded in 1994, its drummer David Grohl began to receive offers from various groups to join them. He declined those offers and went to the studio to record fifteen tracks. He completed almost an entire album in just five days and handed them out in the form of cassettes.

The demo tape caught the attention of various labels and Grohl then decided to form a band. The Foo Fighters released their debut self-titled album on July 4, 1995 and it turned out to be a huge hit. The record sold more than a million copies in the US and earned platinum certification in the country. The album was also certified platinum in Canada.

The Foo Fighters then hit the studio once again and came out with “The Colour and the Shape” two years later. The record cracked the top ten in the US and went platinum in the country. The album was also certified platinum in Canada as well as the UK.

One Success Story After Another

The Foo Fighters’ next two albums, “There Is Nothing Left to Lose” and “One by One” were released in 1999 and 2002 respectively. Both albums sold well over one million copies in the US and got certified platinum in the country. Then came “In Your Honor” in 2005 and it climbed to the second position on the charts in the US, and like all previous Foo Fighters albums, it also sold over a million copies to earn platinum certification in the US.

The Foo Fighters have come out with five album since “In Your Honor.” “Medicine at Midnight” is their most recent album release and it came out on February 5, 2021. The record peaked at the top spot on the US Top Rock Albums chart. It also climbed to the third position on the US Billboard 200. The album also received a lot of critical applause. It received four and a half stars out of five from AllMusic and four stars from both Rolling Stone and NME.

The Foo Fighters have finally announced a full tour schedule for 2021 and rock fans are excited to see them performing live. This will be their first tour since before COVID-19 pandemic because of which they had to cancel their 25th anniversary celebrations. The 2021 tour is scheduled to kick-off proceedings on July 28, 2021 with a concert in Cincinnati at The ICON Festival Stage at Smale Park.

Before that, however, they are also scheduled to headline a concert at the legendary Madison Square Garden on June 20, 2021. The Foo Fighters will be the first band to play there since the arrival of COVID-19. If you want to see the rockers rock your city, then book your Foo Fighters tickets now because they might not last for long.

The average ticket price for Foo Fighters tickets is $172.00.

Available Foo Fighters Tickets till today are 7 with 7973 seats available.

How much are Foo Fighters Tickets for 2021?

Do you offer premium tickets for Foo Fighters ?

Some of the premium tickets for Foo Fighters are in Manchester, MN on Sat, 25 Jun 2022. Often these are front row or floor seat tickets, best available (VIP) seats. These seats are in section QUADRANT HOSPITALITY with 4 seats available at $1450.

How to get discount on Foo Fighters tickets?

You can use the promo code "PROMOEVDT3" to get 3% discount on your purchase of Foo Fighters tickets.

No, Foo Fighters tickets are non-refundable.

How long before the event can I buy Foo Fighters tickets?

You can buy Foo Fighters tickets even on the day of the event, subject to availability. However, it is usually better to book tickets early since seats are limited and prices sometimes rise just before the event. We have 7973 available tickets for Foo Fighters till the date Thu, 30 Jun 2022. Some of the cities where Foo Fighters is performing are: Fresno 4312 tickets, Birmingham 2 tickets, Sacramento 2719 tickets, London 1 tickets, Manchester 17 tickets.

Buying verified tickets is extremely important. If you are looking for Foo Fighters tickets, make sure you buy them from trusted sources. Book tickets from sellers who offer 100% money back guarantee and are popular vendors.

Nothing beats the joy of watching your favorite music artist perform live! Foo Fighters's concert dates are out and fans are looking forward to the upcoming shows. The next concert will be held in Las Vegas at the Park Theater at Park MGM on 2-Dec-21, while the last available date is for the event scheduled for Fresno at the Save Mart Center on 9-Dec-21. For complete information regarding dates and venues, please visit our website.

Q:When is the Foo Fighters Concert in Columbia?

A:The Foo Fighters have announced a fall tour following the release of their new album "Concrete and Gold" on September 15, 2021. The trek will start on October 12 and Columbia's Colonial Life Arena will host a concert on October 17. Foo Fighters Tickets are rising in demand so you might want to hurry.

Q:How can I get information on Foo Fighters 2021 Tickets?

A:You can find all the information on Foo Fighters Tickets on the band's page on our website. Once there, you'll be able to enjoy vast options on the band's upcoming Concrete and Gold Tour which includes different dates, venues, news updates and even tickets rates.

A:Since announcing their massive US fall tour in support of their new album "Concrete and Gold", the Foo Fighters have been adding more shows to the list. They have announced a few one off shows like the July 10 gig at Acropolis of Athens and a UK arena concert at the O2. Foo Fighters Tickets are available on our site for the entire run especially their concerts in the US.

Q:Why do the prices of foo fighters 2021 tour Tickets vary so much?

A:The prices of Foo Fighters Tickets, just like other event tickets, vary depending on two major factors; the nature of tickets and the placement of seats in the venue. The nature of tickets refers to whether they are special or regular tickets. Special tickets, like VIP tickets, are usually priced higher than regular tickets, because they guarantee the holder special treatment at the event. The other factor effecting ticket prices is the placement of seats in the venue. Seats located close to the main stage of a venue are usually priced higher and the price decreases as you move further away from the stage. Since there are numerous seats in the venue, there is a large variation in ticket prices.

A:Just follow the instructions on our page to get the promo codes of Foo Fighters Tickets. Use them and get instant discounts.

A:We are offering foo fighters Tickets on special discount rates. Check the details online and get them right away.

Q:Are there any delivery charges for tickets for foo fighters?

A:Delivery charges for foo fighters Tickets are included in their price published online. There is no additional cost.

Q:Do i need to be a member to get promo code for foo fighter tickets?

A:No, you can get promo codes of foo fighters Tickets anyway, without being a member. Just follow simple guidelines and place the order.

Q:Are you selling foo fighters tickets here on your website?

A:Yes, foo fighters Tickets are currently on sale. Look through our page for details and order right away!

A:Yes, we do sell foo fighters Tickets at cheap rates on our website. Look through our page and you can order from there.

Q:When will you charge my credit card for tickets for foo fighters?

A:Your credit card for foo fighters Tickets will be charged only after the transaction is final.

Q:I am looking for the cheapest foo fighters tickets. What is your offer?

A:We don't promise foo fighters Tickets on cheapest rates but do provide them on comparatively low prices with special discount offers. Check the details online and get them as early as you can!

Q:How can i get cheap foo fighters tickets online?

A:Foo Fighters Tickets are available at the lowest rates available on our website. Just visit our website to get more information regarding the price and shipping charges.

Q:How can i get my foo fighter tickets?

A:Foo Fighters Tickets will be delivered to you through FedEx. They can also be collected from the venue depending on your choice.

Q:Where can i get the cheapest tickets for foo fighters?

A:While we can't guarantee the cheapest Foo Fighters Tickets, they can still be bought from us at the best discounted rates. Happy Buying!