The Tennessee Titans, previously known as the Houston Oilers began playing in 1960 as a charter member of the American Football League. 2021 was a good season for them as they finished the regular season with a 12-5 record. It earned them an AFC South Title, but in the postseason, they came up short against the Cincinnati Bengals in the Divisional Playoffs. Now they will be looking to take the next step. Book your Tennessee Titans tickets to catch them in action live. 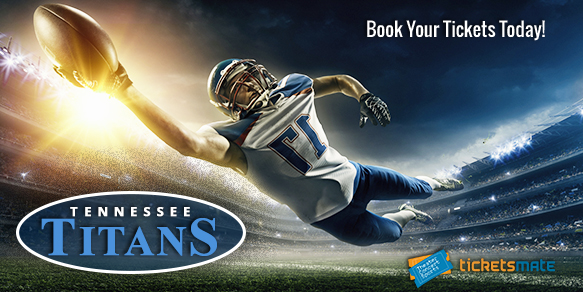 The Tennessee Titans trace their history back to the days of the American Football League. They were based in Houston during their early years and were known as the Houston Oilers. The team’s owner was Bud Adams and the franchises started to play for the first time in 1960.

Then came the AFL-NFL merger of 1970 and the Oilers made the move to the National Football League as part of it. They got off to a slow start in the NFL but made three consecutive trips to the playoffs between 1978 and 1980.

Making their Mark in the NFL

The Oilers then took the next step. Between 1987 and 1993, they made it to the postseason on seven straight occasions and also managed to win two division titles in the process.

1996 was their last year in Houston as the franchise relocated to Nashville, Tennessee to start playing as the Tennessee Oilers. The name was changed to the Tennessee Titans after two years though and that brought about their first trip to the Super Bowl in 1999. The Titans came up against the Rams in the showpiece game but lost the game 16-23. That remains their one and only Super Bowl game.

The Tennessee Titans’ biggest rivals are:

There is no love lost between the Tennessee Titans and the Houston Texans. The history between these two sides dates back to the year 2002, when as a result of the NFL realignment they were put in the AFC South. There is hardly anything to choose from between them right now in terms of head-to-head record. As of October 02, 2022, they have squared off on 40 occasions in the regular season during the Super Bowl era, and the Titans have their noses in front by winning 22 games. The other 18 have been won by the Texans.

The Tennessee Titans and the Jacksonville Jaguars met on the football field for the first time on September 3, 1995 in a clash that was played at the EverBank Field. The Titans, known as the Houston Oilers back then, triumphed 10-3. The animosity reached new levels in the postseason of 1999-2000. The Jaguars were leading 14-10 at HT but the Titans roared back to win 33-14. As of October 02, 2022, the Titans lead the regular season head-to-head record during the Super Bowl era 34-21. That 1999-2000 playoff meeting remains the only time that these two teams have met beyond the regular season.

The Tennessee Titans also have a rivalry with the Indianapolis Colts. The Titans and the Colts met for the first time way back on October 11, 1970. Since then the head-to-head has been quite one sided in favor of the Colts. As of October 02, 2022, the Colts lead the regular season head-to-head record during the Super Bowl era, 35-21. They have also met once in the playoffs and that clash was won by the Titans.

The rivalry between the Tennessee Titans and the Pittsburgh Steelers goes back a long way. These two sides were once members of the AFC Central and met for the first time on September 20, 1970. The Titans came out on top in that encounter 19-7. The Steelers however have stolen the march on the Titans since then when it comes to the games played between them. As of October 02, 2022, the head-to-head regular season record during the Super Bowl era is in favor of the Steelers 48-32. They have also met four times in the postseason and the Steelers have won three of those clashes too.

The Titans finally beat the Colts

The Tennessee Titans have finally snapped their losing streak against the Indianapolis Colts. The Titans took on the Colts at the Nissan Stadium and came out on top 36-22 to notch up their first win against the team from Indianapolis since October 30, 2011. The win not only ends their eleven game losing run against the Colts but also puts them at the top of the AFC South with the Jaguars and the Texans. The Titans are looking good this year and they will be hoping to carry this momentum in their next encounter the Browns.

The minimum ticket price for Tennessee Titans tickets is $37.00.

How much are Tennessee Titans Tickets?

When does Tennessee Titans tickets go on sale?

Do you offer premium tickets for Tennessee Titans ?

Some of the premium tickets for Tennessee Titans are in Nashville, TN on Thu, 29 Dec 2022. Often these are front row or floor seat tickets, best available (VIP) seats. These seats are in section 143 with 2 seat(s) available.

How to get a discount on Tennessee Titans tickets?

You can use the promo code "PROMOOFFER3" to get a 3% discount on your purchase of Tennessee Titans tickets.

How long before the event can I buy Tennessee Titans tickets?

You can buy Tennessee Titans tickets even on the day of the event, if available. However, it is usually better to book tickets early since seats are limited and prices sometimes rise just before the event. We have 25048 available tickets for Tennessee Titans till the date Sun, 29 Jan 2023.

Buying verified tickets is extremely important. If you are looking for Tennessee Titans tickets, make sure you buy them from trusted sources. Book tickets from sellers who offer a 100% satisfaction guarantee and are popular vendors.

Football season is here and is packed with epic matchups. You can catch all the action live as it happens. Next event featuring Tennessee Titans will be Premium Tailgates Game Day Party: Philadelphia Eagles vs. Tennessee Titans, held at the Premium Tailgate Tent - PHL in Philadelphia. As of now, the last event, AFC Championship Game: Tennessee Titans vs. TBD (If Necessary) is scheduled for 29-Jan-23 at the Nissan Stadium - Nashville in Nashville. For complete itinerary of events, please visit our website.

It took me a while to find the right website to buy New Jack City’s tickets. My dad is a huge fan of the original movie so, I wanted to give him a surprise now that its stage production was on its way to my hometown. I was on a budget and that made my task just that little bit harder. Luckily, I found Tickets Mate and got the tickets for the show very conveniently and at a very reasonable price. Now I cannot wait to see the look on my father’s face.