Fans of rock music could not have wished for anything more. One of the all-time great bands is on tour this year and you can enjoy it to the maximum by getting Rolling Stones tickets. The iconic group will be embarking on the North American leg of its No Filter Tour later this summer. More than a dozen shows are planned in different cities of Canada and the United States. It promises to be one spectacular trip full of wonderful music featuring the very best of the Rolling Stones. You can expect the celebrated group to perform all of their greatest hits as they travel around the country and delight the audience at different places. Get your tickets at the earliest.

How much are Rolling Stones tickets selling in different cities?

The chart below shows the top 10 US cities with the highest Rolling Stones ticket sales over the last 7 days. Currently, Inglewood has the highest sale percentage with 275 Tickets sold while Detroit ranks 10th with a sales figure of 56. Please note that these rankings change every day depending on the ticket sales.

Cities Where Rolling Stones Tickets are Selling Most 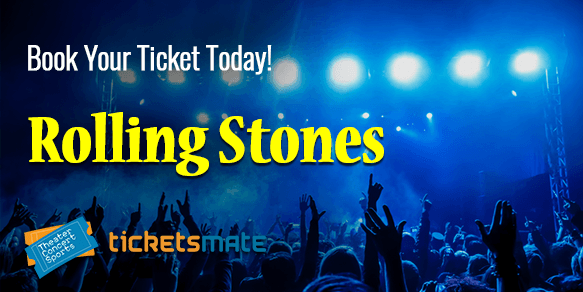 About the Rolling Stones

Legendary English rock band The Rolling Stones has been delighting audiences for more than 50 years now. Having burst onto the scene back in 1962, the group was at the forefront of the British musical invasion of the United States that had become quite popular at that time.

In particular, the Rolling Stones were known as a symbol of the rebellious and youthful counterculture that was all the rage in the 60s. They started out by performing covers of other hit singles. However, the band achieved more success with their original material. These included international hits such as “Paint It Black” and “(I Can’t Get No) Satisfaction.”

The Rolling Stones released their eponymous debut album in 1964 and it was a sensational debut. The album was ranked number 1 in both the UK and Australia while the GfK Entertainment Charts in Germany had it ranked at number 2.

Later that same year, the band released another album called 12 X 5 exclusively in the US. Continuing on the path of success forged by its predecessor, the album reached number 3 on the US Billboard 200 and number 2 on the ARIA Chart in Australia.

This hugely successful beginning laid the foundations of a long and glorious career for the Rolling Stones. They continued to release critically and commercially successful albums all through the 1960s, the 1970s and the 1980s. In the process, Mick Jagger and company were able to cultivate a huge cult following not just at home but all over the world. You can enjoy the very best of their music by getting Rolling Stones tickets.

During the early 1960s, the Rolling Stones experimented quite a bit with their sound. Primarily a blues band at the time, they delved quite deep into the world of psychedelic rock during this time. Ultimately, they returned to their “bluesy” rock roots towards the end of the decade.

It was also during this time that they were presented on stage as “The Greatest Rock and Roll Band in the World” for the very first time. Compared to the 1960s and the 1970s, the Rolling Stones were less active during the 80s and the 90s. However, they continued to be big attractions with their myriad concerts and live performances almost always being in front of sold out crowds.

All in all, the Rolling Stones have released more than 25 full-length studio albums to date. Other record released include over two dozen live albums, compilation albums, a few EPs and more than 100 singles with the majority of them being major hits. With global record sales in excess of 240 million, the Rolling Stones remain one of the highest selling acts of all time.

They are not considered one of the greatest musical acts of all time for nothing. Over the course of nearly 6 decades, the Rolling Stones have built a legacy that will be hard to match for any future acts. During an illustrious career, the band has won many prestigious awards including the Grammys and World Music Awards among others.

Mick Jagger and company have been multiple winners at the Grammy Awards, Billboard Touring Awards, MTV Video Music Awards, NME Awards and World Music Awards among others. There is a whole host of other awards too on the list including the Japan Gold Disc Award, GAFFA Award, Jazz FM Award, and the Juno Award.

That’s not all. The Rolling Stones have also been honored with inductions into the Grammy Hall of Fame as well as the Rock & Roll Hall of Fame and the UK Music Hall of Fame. Rolling Stone magazine has ranked them at number 4 on their list of the “100 Greatest Artists of All Time.”

The upcoming tour will be a depiction of everything that fans have come to love about this iconic band. If you want to enjoy their greatest hits and watch them at their very best, then you should get Rolling Stones tickets today.

Rolling Stones have unveiled the dates of their 2020 No Filter Tour. The legendary British rockers are set to kick off the much anticipated outing with a show in San Diego on May 8. They will then hit major cities across the US and Canada before concluding the road trip in Atlanta on July 19.

The Rock and Roll Hall of Famers are touring to promote their 2019 compilation record Honk. The standard album features 36 songs while the deluxe version includes ten bonus tracks. Overall, the collection contains songs from each of their studio efforts since 1971. To enjoy their hits live, book Rolling Stones tickets.

The Rolling Stones Are Back with “Tattoo You.”

The iconic Rolling Stones have announced to reissue some special editions of their legendary album, “Tattoo You.” The new releases are scheduled to come out in October, 2021 to celebrate the 40th Anniversary of the original quadruple platinum certified album. The latest edition will include at least nine new records from that era that did not make it to the original record.

It will be available in three editions; The standard CD edition will have the actual eleven songs. The Deluxe version with 2 CDs will have the original tracks as well as Lost & Found:Rarities that will have nine tunes. Then there is the “Super Deluxe Boxset” with 4 CDs. In addition to the 2 CDs from the Deluxe version, it will also have another 2 CDs featuring twenty six tunes from the group’s famous 1982 concert at the Wembley Stadium.

The legendary Charlie Watts is no more

The legendary drummer of The Rolling Stones, Charlie Watts has passed away at the age of 80. Watts was instrumental in making The Rolling Stones one of the greatest bands in music history. He joined the group in 1963 and was part of it for more than six decades. He had already announced that he would not be touring with The Rolling Stones on their 2021 tour due to a health issue. Watts’ death marks the end of an era and what a great era it was too.

The Rolling Stones will go ahead with their tour

The Rolling Stones fans and the band itself are still reeling from the shock of Charlie Watts’ death. The legendary drummer, who was part of The Rolling Stones for close to sixty years passed away in London. Watts joined the Stones in 1963, and apart from Mick Jagger and Keith Richards, was the only member to appear on every one of the group’s albums. There were some rumors that the band might cancel or postpone its scheduled road trip. That issue has been put to bed now that the promoter has officially announced that the No Filter Tour will proceed as planned. If you are a fan of the iconic band, then book your Rolling Stones tickets now.

Wouldn’t it be great if you can catch the Rock and Roll Hall of Fame inductees, Rolling Stones live in concert? Well, now you can do just that because the legendary band has announced its ‘No Filter Tour.’ The group will be playing plenty of shows throughout Europe. Their first show of the trek is scheduled to take place at the Stadtpark in Hamburg on September 9th. They will then go on to rock the masses in cities like, Barcelona, Amsterdam, Stockholm and Arnhem before they end their tour by performing their last gig at the U Arena in France.

The average ticket price for Rolling Stones tickets is $127.00.

Available Rolling Stones Tickets till today are 2 with 56 seats available.

How much are Rolling Stones Tickets?

Rolling Stones tickets are typically available for as little as $101, with an average price of $356.08

When do Rolling Stones go on sale?

Do you offer premium tickets for Rolling Stones ?

Some of the premium tickets for Rolling Stones are in Dayton, OH on Sat, 5 Mar 2022. Often these are front row or floor seat tickets, best available (VIP) seats. These seats are in section ORCH CTR with 4 seats available at $687.

How to get discount on Rolling Stones tickets?

You can use the promo code "PROMOEVDT3" to get 3% discount on your purchase of Rolling Stones tickets.

How long before the event can I buy Rolling Stones tickets?

You can buy Rolling Stones tickets even on the day of the event, subject to availability. However, it is usually better to book tickets early since seats are limited and prices sometimes rise just before the event. We have 56 available tickets for Rolling Stones till the date Sat, 5 Mar 2022. Some of the cities where Rolling Stones is performing are: Dayton 44 tickets, San Diego 8 tickets.

Buying verified tickets is extremely important. If you are looking for Rolling Stones tickets, make sure you buy them from trusted sources. Book tickets from sellers who offer 100% money back guarantee and are popular vendors.

How to Buy Rolling Stones Tickets?

Nothing beats the joy of watching your favorite music artist perform live! Rolling Stones's concert dates are out and fans are looking forward to the upcoming shows. The next concert will be held in San Diego at the Hard Rock Cafe - Gaslamp on 5-Feb-22, while the last available date is for the event scheduled for Dayton at the Mead Theatre At Schuster Performing Arts Center on 5-Mar-22. For complete information regarding dates and venues, please visit our website.