Jacksonville, Florida produced one of the most prominent names in the annals of rock history. Who hasn’t at the very least heard of the legendary Lynyrd Skynyrd? The year was 1964 and teenaged Ronnie Van Zant, Gary Rossington and Allen Collins decided to form a band called The Noble Five which was later changed to My Backyard when Larry Junstrom and Bob Burns joined the line-up. Showing signs of great things to come, the band won a Battle-Of-The-Bands contest, for which the prize was the chance to open for the band Strawberry Alarm Clock. 1970 saw the iconic change of name for the band, Lynyrd Skynyrd being a derivative of Leonard Skinner, who was the boys’ gym teacher that harboured a hate for long hair on young men. Much later, Mr. Leonard Skinner, was asked to introduce the band when they performed at Jacksonville Memorial Coliseum one time. Known for their powerhouse performances, honed over years of experience, Lynyrd Skynyrd is a force to be reckoned with on stage. Book your Lynyrd Skynyrd Tickets with us to see for yourself just how entertaining an experience one of their concerts is! 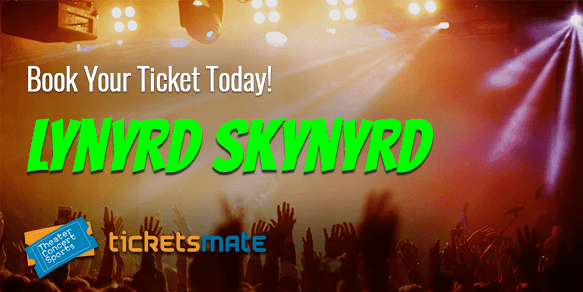 The band has come a long way from competitions and teenage antics. Surviving tragedy, Lynyrd Skynyrd has proven to be a resilient legacy. 1977 was terrible for the band. Just three days after the release of their album Street Survivors and having performed five shows of their most popular tour to that date, their chartered plane crashed into the forest in Mississippi. Ronnie Van Zant was one of those that died on impact and the death toll included Cassie Gaines, Steve Gaines, the pilot and his co-pilot and the assistant road manager Dean Kilpatrick.

Prior to the crash, Lynyrd Skynyrd experienced what most fans think of as the band’s peak years. Their first album was released in 1973 and was titled "(Pronounced 'Leh-'nérd 'Skin-'nérd)", which was a very clever way of getting noticed and also ensuring that there was no confusion about the pronunciation of their uniquely spelt name. The album has gone platinum thrice since its release and it featured the hit track Free Bird. Ronnie was quoted as referring to the song and its name, saying that, "To me, there's nothing freer than a bird, you know, just flying wherever he wants to go. And, I don't know, that's what this country is all about, being free. I think everyone wants to be a free bird."

This was followed by them opening for The Who on their US tour in 1973, which obviously won them much respect amongst rock music fans. Their second album, titled Second Helping, came out in 1947 and was the bands arrival on the scene, as they say. Totally their breakout album, it featured their most famous song to date, "Sweet Home Alabama". They were the headlining band of that year’s Ozark Music Festival, and this album also eventually went platinum. Lynyrd Skynyrd came out with another album in 1957, Nuthin Fancy, which sadly didn’t do so well as the two the preceded it, and neither did their fourth effort, Gimme Back My Bullets. The answer came with Steve Gaines addition to the band, restoring the three guitar attack Lynyrd Skynyrd was known for and their 1977 album, Street Fighters basically showcased his talent as a guitarist and a vocalist. They recorded the double live album, One More for the Road and performed with The Rolling Stones at Knebworth Festival. The band was just about to perform at Madison Square Garden in December, which was a dream of Van Zant’s, in 1977, when in October, the tragedy of the plane crash brought everything to a halt.

Lynyrd Skynyrd came back in 1987, with the deceased members replaced, and fans of the bands were pleasantly surprised at the fact that they still sounded amazing. They haven’t looked back since. Their latest tour, Rebels and Bandoleros, is set to be yet another amazing tour de force for the boys and their legions of fans across the country. The legacy of Lynyrd Skynyrd is awe inspiring; having been listed in the 100 Greatest Artists Of All Time list of The Rolling Stone Magazine, induction into The Rock And Roll Hall Of Fame, and the guitar solo in Free Bird has been named the third greatest guitar solo of all time. Gods and Guns was their last album, released in 2009.

Still going strong and producing great music, a Lynyrd Skynyrd show is a must see, as many music fanatics and lovers surely know. Do not miss your chance and book your Lynyrd Skynyrd Tickets with us as soon as possible for a chance to see these living legends in action!

After a music career spanning over four decades and a catalog that includes more than sixty albums, Lynyrd Skynyrd is gearing up for its final tour – Last of the Street Survivors Farewell Tour. Its first leg will kick start with a show in West Palm Beach on May 4.

Apart from the Rock and Roll Hall of Fame band, the tour will feature several of their friends as the supporting acts. These include names such as Kid rock, Charlie Daniels Band, Marshall Tucker Band and Hank Williams Jr.

Hard rock fans are in for a treat as greats of the genre, Lynyrd Skynyrd, are all set to tour the USA. The band was formed in 1964, with the 70’s proving to be a highly fruitful period for them. Their album Second Helping, was certified 2x Platinum. The album, Nuthin Fancy, which came out in 1975, also received a Platinum certification. However, their most successful album was Street Survivors, which reached a Billboard peak position of 5 and was certified 2x platinum.

The tour by Lynyrd Skynyrd begins on Friday, June 22, 2018, and the group will be covering various cities like Holmdel, NJ, Wantagh, NY, Charlotte, NC, and many other over a span of 6 months. You can now attend the concert according to the date and place that suits you. All you have to do is get your LynyrdSkynyrd: Last of the Street Survivors Farewell Tour tickets. Don’t miss out on this amazing opportunity!

After the Southern Rock icons wrap up the North American run of their Last of the Street Survivors Farewell Tour, they will be hitting the road for its UK and European leg. Set to kick off in June, 2019, the band has unveiled nine dates for the outing so far. Status Quo will be joining Lynyrd Skynyrd for the UK dates while Blackberry Smoke will open on the German dates.

While speaking about the tour earlier in 2018, guitarist Gary Rossington said, “It’s hard to imagine, after all these years, the band that Ronnie Van Zant, Allen Collins and myself started back in Jacksonville, would resonate for this long and to so many generations of fans. I’m certain they are looking down from above, amazed that the music has touched so many.” Tickets for the outing have already been made available so secure the best deals at the earliest.

Lynyrd Skynyrd have recently added new dates to their Last of the Street Survivors Farewell tour. A number of renowned music acts will be joining the Southern rockers on select dates throughout this new run. These include Hank Williams Jr, Bad Company and Cody Links. Fans can expect to listen to Lynyrd Skynyrd classics such as Gimme Three Steps, Call Me The Breeze, What’s Your Name, Simple man and You Got That Right at the upcoming shows. Produced by Live Nation, it will be a tour worth attending. So don’t wait any more to grab your ticket deals.

The average ticket price for Lynyrd Skynyrd tickets is $82.00.

Available Lynyrd Skynyrd Tickets till today are 18 with 27460 seats available.

How much are Lynyrd Skynyrd Tickets for 2021?

Do you offer premium tickets for Lynyrd Skynyrd ?

Some of the premium tickets for Lynyrd Skynyrd are in Morrison, CO on Mon, 27 Sep 2021. Often these are front row or floor seat tickets, best available (VIP) seats. These seats are in section FRONT SEC CENTER VIEW with 8 seats available at $682.

How to get discount on Lynyrd Skynyrd tickets?

You can use the promo code "PROMOEVDT3" to get 3% discount on your purchase of Lynyrd Skynyrd tickets.

No, Lynyrd Skynyrd tickets are non-refundable.

How long before the event can I buy Lynyrd Skynyrd tickets?

You can buy Lynyrd Skynyrd tickets even on the day of the event, subject to availability. However, it is usually better to book tickets early since seats are limited and prices sometimes rise just before the event. We have 27460 available tickets for Lynyrd Skynyrd till the date Sat, 20 Nov 2021. Some of the cities where Lynyrd Skynyrd is performing are: Mansfield 2059 tickets, Greensboro 2912 tickets, Irvine 3463 tickets, Noblesville 1740 tickets, Atlanta 1879 tickets.

Buying verified tickets is extremely important. If you are looking for Lynyrd Skynyrd tickets, make sure you buy them from trusted sources. Book tickets from sellers who offer 100% money back guarantee and are popular vendors.

How to Buy Lynyrd Skynyrd Tickets?

Nothing beats the joy of watching your favorite music artist perform live! Lynyrd Skynyrd's concert dates are out and fans are looking forward to the upcoming shows. The next concert will be held in Paducah at the Carson Park - KY on 3-Sep-21, while the last available date is for the event scheduled for Tupelo at the BancorpSouth Arena on 20-Nov-21. For complete information regarding dates and venues, please visit our website.

Q:How can I pay for lynyrd skynyrd concert tickets?

A:You can pay for Lynyrd Skynyrd Tickets by American Express, Visa and Discover. Cash will not be acceptable.

A:If the tour dates are changed, your Lynyrd Skynyrd Tickets will be adjusted accordingly.

Q:Can I choose my seats for lynyrd skynyrd tour tickets?

A:We are sorry to inform you that since our brokers don't allow that, you can not choose your seats for Lynyrd Skynyrd Tickets. However, you can select your rows and sections.

Q:What is the price of discount lynard skynard tickets bethleham?

A:We are offering Lynyrd Skynyrd Tickets on reasonable prices. Check out the directions and place the order as early as possible.

Q:From where can i get the information on deals on lynyrd skynyrd tickets?

A:The discount deal information about Lynyrd Skynyrd Tickets is placed on our page. Check for the instructions and place the order right away.

Q:Can i get the cost breakup for cheap lynyrd skynyrd tickets?

A:The cost breakup for Lynyrd Skynyrd Tickets is published on our page. Check and order right away.

A:Yes, we are certified by trusted authorities and allow the exchnage of Lynyrd Skynyrd Tickets in a secure environment.

Q:My credit card is not yet charged for kynyrd tickets. How long is it going to take?

A:Your credit card will be charged for lynyrd skynyrd Tickets within one business day. We apologize for the delay.

A:Yes, we do sell cheap lynyrd skynyrd Tickets on our website. You can look through our page for details and order your tickets right away!

Q:How can i get tickets for lynyrd skynyrd on discounted rates?

A:You can get lynyrd skynyrd Tickets on discounted rates by availing the promotion codes available online. Check it out and place the order.

Q:How soon will my Lynyrd Skynyrd tickets be delivered to me?

A:All tickets are delivered within the specified time. In case there is any additional delay, then please contact us on given numbers.