The famous YouTube personality, JoJo Siwa is heading out on tour. So, get your hands on these JoJo Siwa tickets from here and watch as she entertains you live. She is only fifteen but has still developed a global following. Her fans adore her for her singing and dancing. She also knows how to act and has showed her impressive acting skills on different television shows including, ‘The View,’ ‘Make it Pop,’ ‘The Thundermans’ and ‘School of Rock.’ She has also won a couple of Nickelodeon Kids’ Choice Award for, ‘Favorite Viral Music Artist’ and ‘Favorite Musical YouTube Creator.’

Click on "Get Tickets Alert" to get notified via email before tickets go on sale.

Discover Events Near You!

Write down your email and never miss an update. 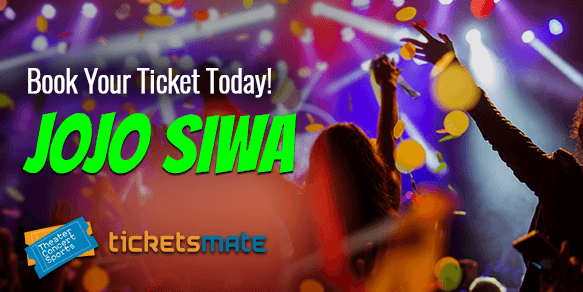 JoJo Siwa is a social media sensation who is famous for the big bows in her hair and for her catchy songs including, Only Getting Better and Hold the Drama. She is now setting out on, ‘D.R.E.A.M. The Tour’ and will be playing many shows across the States. So, if you want to know what she has to offer, then grab a pair of JoJo Siwa tickets and watch her perform live.

Destined to be a star

Joelle Joanie Siwa or better known as JoJo Siwa was born on May 19, 2003 in Omaha, Nebraska. She developed her love for dancing at an early age thanks to her mother, Jessalynn Siwa who is a professional dance instructor. As she was growing up, Siwa began to learn different dance styles including, hip-hop and soon participated on Lifetime’s reality dance competition series, ‘Abby’s Ultimate Dance Competition’ with her mother. She became a top 5 finalist on the show. She continued to perfect her dancing skills and soon auditioned for Abby Lee Miller’s ALDC. At the same time, she featured on the Lifetime reality show, ‘Dance Moms.’

While she was trying to make it as a dancer, JoJo Siwa made her YouTube channel and became a huge social media star. As of now, she has uploaded more than eight hundred videos on her channel. She shared her first video, ‘Q&A with JoJo Siwa’ on February 7, 2015 which crossed seven hundred thousand views. Since then, she has gone on to put out many interesting videos including, ‘Fan Gifts,’ ‘Learn a Dance With JoJo,’ ‘Baby JoJo!! My First Solo’ and ‘House Tour’ all of which received millions of hits. As her popularity began to skyrocket, Siwa and her mother moved to California and soon, she was signed to Nickelodeon.

Besides dancing and sharing interesting videos on YouTube, JoJo Siwa is also interested in music. She took her first steps as a singer-songwriter in 2016 by releasing her first single, Boomerang. The song turned out to be a surprise hit which helped her gain more fame across the world. It was an upbeat track and delivered a strong message regarding cyberbullying. This single was initially certified gold by the RIAA but due to the song’s growing popularity, it eventually went platinum in the United States.

The music video of Boomerang was released on May 17, 2016. It features her mother along with former Dance Moms cast and has been viewed more than six hundred million times on YouTube.  She continued to release more music and came out with three singles in 2017 including, Kid in a Candy Store and I Can Make U Dance. A year later, JoJo Siwa recorded four singles, Every Girl’s a Super Girl, High Top Shoes, Only Getting Better and D.R.E.A.M.

JoJo Siwa has also put out many books. Her first book was titled, ‘JoJo's Guide to the Sweet Life: #PeaceOutHaterz’ which hit the shelves on October 3, 2017. In 2018, she put out four books entitled, ‘Things I Love: A Fill-In Friendship Book,’ ‘JoJo Loves BowBow: A Day in the Life of the World?s Cutest Canine,’ ‘JoJo's Guide to Making Your Own Fun: #DoItYourself’ and ‘Take the Stage (JoJo and BowBow Book #1).’

JoJo Siwa is now gearing up for her first outing, ‘D.R.E.A.M. The Tour.’ She plans to start it by performing a show at the Comerica Theatre in Phoenix on May 17, 2019. She will then play her second gig at the Microsoft Theater in Los Angeles on May 19, 2019. From there, Siwa will go on to trek through cities like, San Diego, San Jose, Seattle, Denver, Tulsa and New York before concluding the tour by hitting the stage at the Bass Concert Hall in Austin on June 26, 2019. This is your chance to enjoy her music live so, grab these JoJo Siwa tickets today and have a great time at the show.

The 16-year-old entertainer JoJo Siwa is not ready to leave the road just yet. The Nickelodeon star and YouTube sensation announced 50 more dates to the already extensive 2019 D.R.E.A.M. tour.  The trek kicks off at the Forest Hills Stadium in Queens, New York on July 21 and wraps up at The Theatre at Grand Prairie in the Dallas area on September 17. Siwa is a hot favorite of children who gained attention with Dance Moms.  She went on to win hearts with her presence on Nickelodeon and YouTube. The young star has become a voice against online bullying and has inspired children with her dancing skills. JoJo kicked off her first tour, The Dream Tour in 2018. Currently, she is the youngest star on tour in Europe and the US. Siwa is making new records on her massive world tour. You can catch the singer and dancer live with Jojo Siwa tickets.

All those who have been waiting to see the Nickelodeon superstar JoJo Siwa live; your wait comes to an end this summer. The young artist was in the middle of her JoJo Siwa D.R.E.A.M. The Tour produced by Nickelodeon and AEG Presents when the pandemic changed all plans. Her first live tour was a massive one and had to be postponed. Now the singer is back to pick up from where she left. Siwa will hit the road on June 19, 2021 at the Pan American Center in Las Cruces, New Mexico and continue all through the next three months before she wraps up her act on August 21 at the Toyota Center in Houston, Texas. JoJo Siwa has three months of packed performances which means there are many opportunities for you to see her live. So score your JoJo Siwa tickets now and watch her sing hits like “Boomerang,”“Kid in a Candy Store,” “Hold The Drama”, and D.R.E.A.M.