Renowned American music artist James Taylor is all set to treat the fans with his newest record –American Standard. Due in February, it is Taylor’s first album since Before This World in 2015. The upcoming album is largely a collection of covers. In Taylor’s own words, “I've always had songs I grew up with that I remember really well, that were part of the family record collection – and I had a sense of how to approach, so it was a natural to put American Standard together.” Taylor has announced a promotional tour for the new record and joining him on the road is Jackson Browne. If you wish to catch them live, secure James Taylor & Jackson Browne tickets now. 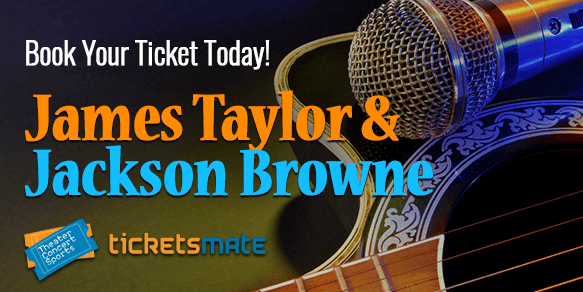 The first commercially successful record of James Taylor was his second studio effort titled Sweet Baby James. Released back in 1970, it featured the hit single Fire and Rain which reached the third spot on the Billboard Hot 100. The record sold around 1.5 million copies within its first year. It went on to receive a Grammy nomination in the ‘Album of the Year’ category in 1971. Sweet Baby James

James Taylor’s 1971 record Mud Slide Slim And The Blue Horizon was an even bigger success than Sweet Baby James. The single You’ve Got a Friend was a massive hit and reached the top spot on the Billboard charts. Written by Carole King, the song was first recorded by King and featured on her record titled Tapestry. The ranked 104th on the 500 Greatest Albums of All-Time list by the Rolling Stone magazine. James Taylor’s version of the track won Grammys for both Taylor and King in the categories of ‘Best Male Pop Vocal Performance’ and ‘Song of the Year’ respectively. Over the years numerous other artists have recorded covers of this song. Among them are notable acts such as Michael Jackson, Dusty Springfield, Donny Hathaway and Anne Murray.

Taylor’s eighth studio album JT was a triple platinum success; it sold over three million copies in America alone. The cover version of Jimmy Jones and Otis Blackwell’s Handy Man hit the top position on the Billboard’s Adult Contemporary chart and fourth on the Billboard Hot 100. The track was a top hit on the Canadian music charts and also won Taylor an award for the ‘Best Male Pop Vocal Performance’ at the 1978 Grammys. Other popular songs on the collection include Terra Nova and Secret O’ Life. The album itself received a Grammy nomination in the ‘Album of the Year’ category. It was the singer’s highest charting record since Mud Slide Slim and the Blue Horizon and is regarded as one of his best-selling studio efforts in the US, with sales of more than 3.5 million copies.

James Taylor is all set to release his nineteenth studio album American Standard through Fantasy Records in February 2020. In this project, the legendary singer and songwriter infuses new sounds and meaning to timeless pieces of music art, making them fresh and appealing to the audience of the modern age. It features renditions of over a dozen classic standards including Almost Like Being in Love, My Heart Stood Still, It’s Only a Paper Moon and Pennies From Heaven.

While talking about the collection in a news release, the musician stated “In terms of how they were performed and recorded before, we paid attention to the chords and melody. But we were interested in doing something new, and, in bringing something new to it, we've reinterpreted the songs. That's what makes it worth doing."


American Standard follows up his album Before This World which released in the year 2015 and is the first number one album of his career.

After the release of American Standard, James Taylor will embark in an extensive joint tour with fellow troubadour Jackson Browne. Browne’s most recent album to hit the shelves is his 2014 record Standing in the Breach. It was his first album featuring new music material in six years. As with many of Browne’s records, it contains a mix of political and personal songs.

The two Rock and Roll Hall of Fame inductees will kick off the tour with a show in New Orleans on May 15. The 28-date tour includes stops in notable cities such as Atlanta, Boston and Chicago among others. If you wish to enjoy their music in a live atmosphere, don’t wait another moment to secure the best available deals on James Taylor & Jackson Browne tickets.

James Taylor & Jackson Browne Tickets Are Up for Grabs!

The dates of five-time Grammy Award winner James Taylor and His All-Star Band’s North American tour are out. Joining him on the road as a special guest is his dear friend and music legend, Jackson Browne. The trek was originally supposed to take place in 2020, but was scheduled to 2021 due to the Covid-19 pandemic. Fans must hold on to the tickets that they had bought for the 2020 shows as they will all be honored for all the rescheduled dates. Taylor’s songs like ‘Carolina in My Mind’ and ‘Fire and Rain’ are filled with powerful storytelling and enjoying them live is a treat to experience. Listening to Jackson Browne’s hits like ‘Running on Empty’ and ‘Somebody’s Baby’ would be cherry on top. So if you haven't bought James Taylor & Jackson Browne Tickets yet, do so at the earliest and enjoy the two legends’ classics live.

How much are James Taylor & Jackson Browne Tickets for 2021?

When do James Taylor & Jackson Browne go on sale in 2021?

Do you offer premium tickets for James Taylor & Jackson Browne ?

Some of the premium tickets for James Taylor & Jackson Browne are in Portland, OR on Mon, 25 Oct 2021. Often these are front row or floor seat tickets, best available (VIP) seats. These seats are in section Diamond VIP with 6 seats available at $1610.

How to get discount on James Taylor & Jackson Browne tickets?

You can use the promo code "PROMOEVDT3" to get 3% discount on your purchase of James Taylor & Jackson Browne tickets.

How long before the event can I buy James Taylor & Jackson Browne tickets?

Buying verified tickets is extremely important. If you are looking for James Taylor & Jackson Browne tickets, make sure you buy them from trusted sources. Book tickets from sellers who offer 100% money back guarantee and are popular vendors.

Nothing beats the joy of watching your favorite music artist perform live! James Taylor & Jackson Browne's concert dates are out and fans are looking forward to the upcoming shows. The next concert will be held in New Orleans at the Smoothie King Center on 16-Oct-21, while the last available date is for the event scheduled for Buffalo at the KeyBank Center on 13-Dec-21. For complete information regarding dates and venues, please visit our website.