Thrash metal legends, Megadeth have two special tours planned for this year. The first road trip sees them team up with Lamb of God, while on the second one, they will join hands with Five Finger Death Punch, The HU, and Fire From The Gods. All you have to do is grab your Megadeth tickets and watch the icons rock arenas all across the country. 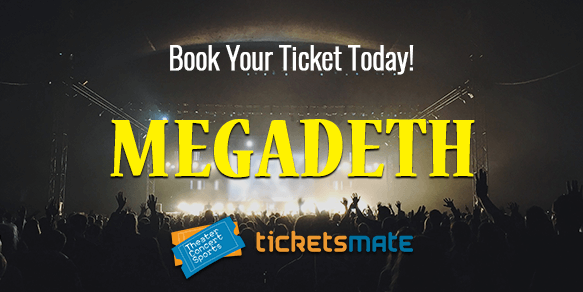 Megadeth have sold over 38 million records worldwide. The band has earned platinum certification in the US for one-third of its studio albums, along with a dozen Grammy nominations. Their 2017 song ‘Dystopia’ also bagged a Grammy for the “Best Metal Performance.” Megadeth are in a select company of underground metal bands that propped up in the 1980s to enjoy commercial success. Many consider them to be one of the founding members of the thrash metal movement.

Megadeth, as it stands today, is a result of numerous incomings and outgoings of guitarists, bassists and drummers throughout the four decades of its existence. This revolving of artists is something that is part of the genetic makeup of the band as their founding member Dave Mustaine is himself a former member of Metallica who parted ways with them even before their debut album was released.

Excitingly, the first time Mustaine met his founding partner and bassist David Ellefson, Ellefson was practicing Van Halen's “Runnin’ with the Devil” in the building where Mustaine lived. Mustaine had gone to tell Ellefson to ‘knock it off’, but ended up founding the band with him shortly afterwards. The rest is history, as Megadeth continued to climb the heights of fame and popularity and now it is one of the “big four” of American thrash metal, along with Metallica, Anthrax, and Slayer.

Holy Wars… The Punishment Due

In my Darkest Hour

Dread and the Fugitive Mind

Megadeth and Lamb of God Tour

Following the first successful part of the “Metal Tour of the Year” in 2021, Megadeth and Lamb of God have now announced the 2022 version of the road trip. The two icons will hit the road for what promises to be one of the most talked about tours of the year. The tour will start on April 9, 2022 at the Michelob Ultra Arena in Las Vegas. The tour will also make stops in Tucson, Colorado Springs, Omaha, Green Bay, Tulsa, Nashville, Toronto, and Quebec City, etc. Watch these two thrash metal icons live in concert by booking your Megadeth and Lamb of God tickets now.

The second tour of 2022 will see Megadeth join hands with Five Finger Death Punch for an epic tour, spanning thirty two dates. These two titans will also be joined by the likes of The HU and Fire From The Gods. The road trip is slated to start on August 19, 2022 in Portland and is scheduled to end on October 15, 2022 in Salt Lake City. Between these two dates, the tour will make stops in places like Auburn, Phoenix, Dallas, Houston, Raleigh, Pittsburgh, Cincinnati, St. Louis and Denver among other places. Book your Megadeth tickets now to be part of this unforgettable tour.

American thrash metal band Megadeth will soon hit the road to promote their new music album ‘Dystopia.’ The 11-city trek will kick off from Big Flats on June 23 and stretch into July, visiting cities such as Columbus, Pittsburgh, Boston, Houston and Philadelphia. Joining Megadeth on tour as special guests will be Meshuggah, Lillake and Tesseract. After the thrash metal pioneers wrap up this tour they will join Scorpions on the North American leg of their Crazy World Tour. ‘Dystopia’ released in January of 2016 and reached the third spot on the Billboard 200. It is the band’s highest charting record since ‘Youthanasia’ in 1994.

The minimum ticket price for Megadeth tickets is $19.00.

How much are Megadeth Tickets?

The least expensive Megadeth ticket is $5 in section PARKING with 1 tickets available.

When does Megadeth tickets go on sale?

How to buy cheap Megadeth tickets?

Do you offer premium tickets for Megadeth ?

Some of the premium tickets for Megadeth are in Cuyahoga Falls, OH on Tue, 4 Oct 2022. Often these are front row or floor seat tickets, best available (VIP) seats. These seats are in section Diamond Deluxe with 6 seat(s) available.

How to get a discount on Megadeth tickets?

You can use the promo code "PROMOOFFER3" to get a 3% discount on your purchase of Megadeth tickets.

How long before the event can I buy Megadeth tickets?

You can buy Megadeth tickets even on the day of the event, if available. However, it is usually better to book tickets early since seats are limited and prices sometimes rise just before the event. We have 22126 available tickets for Megadeth till the date Sat, 15 Oct 2022.

How to Buy Verified Megadeth tickets?

Buying verified tickets is extremely important. If you are looking for Megadeth tickets, make sure you buy them from trusted sources. Book tickets from sellers who offer a 100% satisfaction guarantee and are popular vendors.

Nothing beats the joy of watching your favorite music artist perform live! Megadeth's concert dates are out and fans are looking forward to the upcoming shows. The next concert will be held in Cincinnati at the Riverbend Music Center on 28-Sep-22, while the last available date is for the event scheduled for Salt Lake City at the USANA Amphitheatre on 15-Oct-22. For complete information regarding dates and venues, please visit our website.