Luke Combs is one of the fastest rising stars in country music who appeared on the surface of country music in 2017. He had already got the world taking about him with his two extended plays, ‘The Way She Rides’ and ‘Can I Get an Outlaw’ prior to the release of his first studio album, ‘This One’s For You’ in 2017, His music instantly attracted millions of fan and he was named by Sounds Like Nashville as one of their ‘Artists to Watch.’ He will now be seen on a tour with Brantley Gilbert. Together, the duo will be playing plenty of shows in the month of September. So, if you want to watch them perform in your city live then book your Luke Combs tickets now. 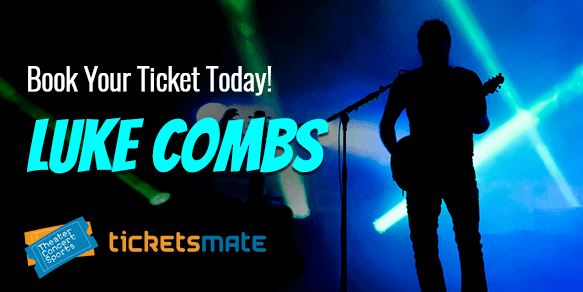 The North Carolina native, Luke Combs came to the fore as a country star in 2017. He has now teamed up with the ACM Award winner for, ‘Top New Male Artist,’ Brantley Gilbert and the duo plans to hit the road in September. They will both be sharing the stage together and you can bet that their fiery performances will bring the roof down. So, grab a pair of Luke Combs tickets and watch as these two names entertain you live.

Luke Combs: A new face in the industry

Though Luke Combs is a fresh face in the industry, it doesn’t mean he does not know what it takes to be a successful country star. Combs discovered his vocal talents when he was still growing up. Born in North Carolina, he studied at the Appalachian State University and later moved to Nashville to make his name in the music business.

He started off by releasing two extended plays, ‘The Way She Rides’ and ‘Can I Get an Outlaw’ in 2014. These two EPs gave him minimal success in the United States. The former EP featured three songs, The Way She Rides, I Know She Ain’t Ready and Let the Moonshine. Country fans heard songs like, Sheriff If You Want To, She Got the Best of Me and Can I Get an Outlaw in his sophomore extended play.

In 2016, Luke Combs rose to stardom when he released his first single, Hurricane. The song received massive airplay in the United States. Produced by Scott Moffatt of The Moffatts, it climbed to the top spot on the Country Airplay chart and was certified platinum in both the U.S and Canada. He later released the music video of Hurricane which got nominated for the CMT Music Award in the category of, ‘Breakthrough Video of the Year’ in 2017.

Issued by Columbia Records, the song became a critical hit. Taste of Country gave positive reviews about the song and stated, “The singer proves he’s a strong storyteller, but also a stylist, with a complex chorus that allows a mainstream production to pop from the speakers.” As of now, the song has sold in excess of five hundred thousand copies in the U.S.

This One’s For You

After a year in 2017, Luke Combs made his mainstream debut by putting out his first LP, ‘This One’s For You.’ It landed at the first spot on the Top Country Albums chart whereas, the album reached fifth spot on the Billboard 200. The album has so far sold more than eighty thousand copies in the United States.

Produced by, The Jackie Boyz, Scott Moffatt and Sammy Mitchell, the album received great response from different publications. Sounds Like Nashville praised Luke in words, “vocals are one thing that Combs has in his favor. You get the feeling that no producer had to coach him to be country." It received three and a half stars out of five from AllMusic who also wrote, “The tension between Combs' traditional side and modern inclinations is what gives This One's for You some freshness and it surfaces often.”

Luke is now scheduled to tour and will be performing shows in some of the biggest venues throughout the month of September with Brantley Gilbert. He will start his trek by playing the first show at Darling’s Waterfront Pavilion on September 8th. From there, the Tennessee native will go on to play shows in cities like, Hartford, Cincinnati, Maryland Heights and Virginia Beach. He is expected to conclude his road trip by performing his final show at the Coastal Credit Union Music Park at Walnut Creek in Raleigh on September 23rd. If you are planning to watch him play music live then, simply, get your hands on Luke Combs tickets now as they are in high demand.

"What You See Is What You Get" Tour

The much anticipated road trip kick starts with a show in Columbia, Missouri in February 2020 following which the musician will be making stops in notable cities including Colorado Springs, Albuquerque and Grand Rapids. Joining Combs as opening acts for the trek are music artists Drew Parker and Ashley McBryde. If you wish to attend the show in your city, check out the itinerary and secure your Luke Combs tickets at the earliest.

The 2020 Country Thunder music festival will feature Kane Brown, Dustin Lynch, Eric Church and Luke Combs as headlining artists. The 5-day extravaganza will also include performances from the likes of Russell Dickerson, Gabby Barrett, Chris Janson, Ashley McBryde, Randy Rogers Band, Tenille Townes, Dallas Smith, Riley Green, Pam Tillis, Meghan Patrick, Suzy Boggus and Terri Clark among others. It all kicks off on April 15, 2019 with Lynch being the headlining act the next day. Combs, Brown and Church will take their place as headliners on April 17, 18 and 19 respectively.

Luke Combs fans are looking forward to seeing him live in concert in 2021 and it seems the singer won’t disappoint them. The country music star intends to hit the road for his What You See Is What You Get 2021 Tour and continue from where he left off. The road trip includes all 2020 concerts that had to be postponed due to the corona virus pandemic. Ashley McBryde and Drew Parker were the support acts for the first leg of the 2020 tour and they will be joining Combs once again on select dates. Catch his energy filled concert live with Luke Combs tickets and listen to smash hits like "Beer Never Broke My Heart," "Lovin' on You," "Does to Me," "Even Though I'm Leaving" and more country gems.

The minimum ticket price for Luke Combs tickets is $39.00.

How much are Luke Combs Tickets?

When does Luke Combs tickets go on sale?

Do you offer premium tickets for Luke Combs ?

Some of the premium tickets for Luke Combs are in Arlington, TX on Sat, 25 Mar 2023. Often these are front row or floor seat tickets, best available (VIP) seats. These seats are in section FIELD LEVEL SUITE 5A with 1 seat(s) available.

How to get a discount on Luke Combs tickets?

You can use the promo code "PROMOOFFER3" to get a 3% discount on your purchase of Luke Combs tickets.

How long before the event can I buy Luke Combs tickets?

You can buy Luke Combs tickets even on the day of the event, if available. However, it is usually better to book tickets early since seats are limited and prices sometimes rise just before the event. We have 113866 available tickets for Luke Combs till the date Fri, 20 Oct 2023.

Buying verified tickets is extremely important. If you are looking for Luke Combs tickets, make sure you buy them from trusted sources. Book tickets from sellers who offer a 100% satisfaction guarantee and are popular vendors.

Nothing beats the joy of watching your favorite music artist perform live! Luke Combs's concert dates are out and fans are looking forward to the upcoming shows. The next concert will be held in Albany at the MVP Arena on 30-Sep-22, while the last available date is for the event scheduled for Arlington at the AT&T Stadium on 25-Mar-23. For complete information regarding dates and venues, please visit our website.

Q:Does the All For The Hall Festival lineup include Luke Combs?

A:A benefit event for the Country Music Hall of Fame, 2022 All for the Hall concert features a stellar lineup. Along with Keith Urban the other star performers include Chris Stapleton, Blake Shelton, Luke Combs, Tanya Tucker, Ingrid Andress and , Brothers Osborne, among others. Luke Combs Tickets are available for the event scheduled for February 10, 2022.

Q:Who is the opening act for Luke Combs?

A:Luke Combs has announced his 2022 "What You See Is What You Get Tour" and it will kick off from Columbia on February 7. He has revealed Ashley McBryde and Drew Parker as the supporting artists and they will perform on select dates. Luke Combs Tickets page on our site has the complete list of events and it also features the performing artist for that date.

A:Luke Combs Tickets can be purchased form out site at affordable rates. If you are looking for cheap deals, then please choose a seat and row at the venue that fits your budget. At the moment the minimum get in price for Luke Combs 2022 tour is $9.

A:Prices vary for Luke Combs tickets for different dates. Please go to Luke Combs page on our website and browse through the What You See Is What You Get Tour inventory. Select the date on which you want to attend the concert and follow the simple steps. The final ticket price will depend on your seat.

A:Luke Combs is touring in 2022 in support of his second album "What You See Is What You Get" that came out in November 2022 and topped the Billboard Country charts. According to the information released, Drew Parker and Ashley McBryde will be joining him as the supporting acts. Both the artists have a huge following of their own, which is why Luke Combs Tickets are rising in demand.

Q:I need Luke Combs 2022 Tickets on urgent basis. When will I get them?

A:Your Luke Combs Tickets will be dispatched as soon as you have placed your order. Your package will then be delivered by Fedex within five business days. Combs is an upcoming country star who took over the industry by storm when he released his debut studio effort, ‘This One’s For You.’ He has also earned a Country Music Association Award nomination for, ‘New Artist of the Year.’

Q:I am looking for Luke Combs Tickets. Do you have them in stock?

A:Yes! Our reliable brokers have the Luke Combs tickets in stock and you can get them from our website today. Combs is a country hit maker who is behind two chart-topping singles, Hurricane and When It Rains It Pours. So, if you are of his music then it is preferred to grab your concert tickets now as they are currently high in demand.