Grab your Staind tickets and watch the legendary rock band live in concert with Korn. The two famous rock bands have joined hands for what is one of the most highly-anticipated treks of the year. Staind are without a doubt one of the biggest metal bands of the current era. The Staind tour with Korn will kick-off proceedings on August 5, 2021 with a show at the iTHINK Financial Amphitheatre in West Palm Beach. They will perform concerts at famous venues like the Ameris Bank Amphitheatre, the BB&T Pavilion, the PNC Bank Arts Center, the  Ak-Chin Pavilion, and the Banc of California Stadium, etc. If you are into metal music, then get your tickets before they are sold out. 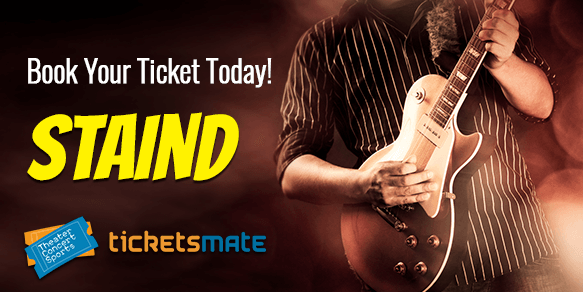 Staind was formed when the members of the group met each other due to mutual friends and began to cover songs in small time clubs by bands such as Alice in Chains, Tool, Pearl Jam, Rage Against the Machine, KoRn and numerous more as well. After performing around the local club scene for one and a half years, the band released their debut album in November of the year 1996. The record was self released and titled Tormented. The band cites Machine Head and Pantera as their influences for their debut album. Originally, only 4000 copies of the record were made available in the market.

Staind released their first major level album on the 13th of April, 1999. The album was released with Flip Records and was called Dysfunction. The producers of the record were Terry Date and Fred Durst. It received a slow success, reaching the number one place on the Heatseaker Charts on Billboard after almost 6 months of its release. It also appeared on the number seventy four spot on the Billboard Top 200 Albums chart in the same week. Some of the most popular singles from the album included hits such as Home, Excess Baggage, Mudshove, and Just Go among various more as well. Home cracked the Top Twenty the Billboard Mainstream and Modern Rock charts. The band toured heavily in order to promote the album and performed with groups such as The Crystal Method and Limp Bizkit.

The third studio album by Staind was released on the 22nd of May, 2001 under the title of Break the Cycle. The record went on to sell 716,000 copies in the first week of its release, and debuted at the number one spot on Billboard's Top 200 Album chart. It also spawned a Top Ten Billboard hit single, It's Been A While. The album made the second most sales record of the year, which was an extremely important achievement for the group. The band focused more on an alternative metal sound than nu metal in the album, which produced five hit singles: Epiphany, For You, Outside, Fade and It's Been A While.

Over the course of their career, Staind have managed to sell more than fifteen million copies of their albums all over the world and produced five chart topping singles. Some of their other hit albums include 14 Shades of Grey, Chapter V, The Illusion of Progress, and Staind. Now the band is all set to rock you away at their latest shows. Be there by booking your Staind tickets right here, and have an evening full of lots of entertainment and fun!

Known for their powerful sound, Staind has built a solid reputation as the bona fide hit makers of alternative metal music. Over the course of their career, they have released many chart-topping songs including So Far Away, Right Here, Believe and Not Again.

On April 12, 2019, the lead singer of Staind shared his third and latest studio album called 'State I'm In.' The effort peaked at the second spot on the Top Country Albums chart. Produced by Buddy Cannon, this record features ten songs including God and Guns, If I Were the Devil and Can't Take Back.

Besides putting out new music, Aaron Lewis is also touring solo and is scheduled to perform acoustic shows in multiple cities including, Tulsa, Detroit, Colorado Springs, Denver, Charleston, Austin and Hampton. He is also scheduled to perform at the historic Brushy Mountain State Penitentiary as a part of the, 'LIVE at Brushy.'

Disturbed is one of the most sought after heavy metal groups of all time. On January 23, 2020, the guys released the music video of their latest single Hold On to Memories. It has received more than one million views on YouTube. The guys are now embarking on tour to celebrate the 20th  Anniversary of their debut album, 'The Sickness.' This tour will feature Staind who will be performing some of their biggest hits live.

Bad Wolves to Open the Tour

Disturbed and Staind will not be touring alone as they will be joined by Bad Wolves who will be touring with the bands as an opening act. The guys put out their most recent studio album, 'N.A.T.I.O.N' on October 25, 2019. It entered the Billboard 200 at the 78th spot and contained songs like, Foe or Friend, Heaven So Heartless and Crying Game. The guys are expected to perform their latest hits from 'N.A.T.I.O.N' live.

Staind, Disturbed and Bad Wolves are scheduled to begin the tour with a show at the Hollywood Casino Amphitheatre in Maryland Heights on July 15, 2020. They will then go on to travel many cities including Tampa, Bristol, Hershey, Hartford, Syracuse and Toronto before the acts conclude the road trip on September 12, 2020.  So, if you want to attend one of their upcoming concerts live then get your Saind tickets.